RAC future-proofs fleet in readiness for rapid growth in EVs

The RAC is deploying 50 custom-built Isuzu D-Max 4x4s to its patrol fleets to bring an advanced recovery solution, in particular for the growing use of electric vehicles as well as SUVs and 4x4s. 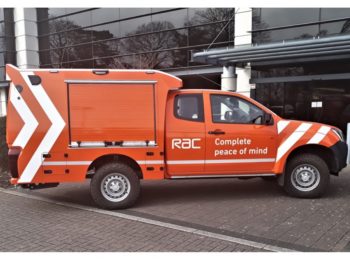 Unveiled at the 2019 CV Show and developed in partnership between the RAC’s technical team, Isuzu and Strong’s Plastic Products, the fleet of D-Max 4x4s have the towing capacity to recover vehicles up to 2.8 tonnes and also feature the new All-Wheels-Up recovery system, which enables the patrol to lift all four wheels of broken-down vehicles, effectively bringing flatbed recovery capability.

Already deployed on 600 long-wheel based RAC patrol vans, the technology means that vehicles normally needing to be recovered separately – including crossovers, SUVs, 4x4s, pick-ups, vans, automatics, hybrids and even electric vehicles – can now all be recovered by a single patrol van, as can those with faults which make towing impossible, such as multiple punctured tyres, handbrake or transmission failures and many breakdowns caused by potholes.

The new D-Max fleet also comes equipped with the RAC’s EV Boost electric vehicle charging system, which was also unveiled at the CV Show and provides stranded EV drivers with a power boost, equivalent to a top-up from a fuel can for a petrol or diesel car, to get them on their way again.

The bodyshell of the new vans is manufactured by Strongs Plastic Products from tough polymer plastic to provide optimum strength as well as significant weight saving. The shell comes with a 20-year guarantee and will be used on multiple vehicles during its lifetime, as the RAC upgrades its fleet.

The Isuzus also feature a new motorbike recovery carrier and have been equipped to accommodate the standard RAC patrol kit of 500 parts and tools.

The vehicles will predominantly be deployed in some of the UK’s busiest towns and cities where there is the highest proportion of big vehicles and where it can be a logistical nightmare for flatbed vehicles to operate.

RAC head of technical James Gibson said: “Our first priority is always to deliver a permanent repair at the roadside, however on those occasions when we cannot fix the vehicle then RAC Heavy Duty 4×4 Patrol van will enable our patrols to recover some of the biggest vehicles without the need for a second call-out for a flatbed and the additional time this takes.

“We see it as a game changer which future-proofs our fleet in readiness for a rapid growth in EVs and the ongoing demand for larger SUVs. It also ensures we have the right kit for our business customers.”