The new BMW 5 Series is available to order this month, with the range getting plug-in hybrid and autonomous technology from the latest 7 Series. 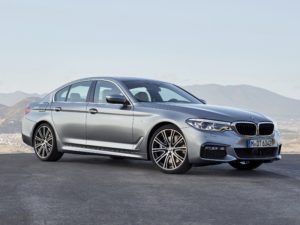 The new BMW 5 Series will be available with plug-in hybrid and autonomous technology from the 7 Series.

Due for first deliveries in February next year, the 5 Series launches as a two-trim range comprising SE and M Sport, with the majority of UK drivers expected to take the latter. A Touring estate will be available shortly afterwards.

The likely big-selling engine in fleet will be the 188bhp 520d, which now gets an eight-speed automatic gearbox as standard returning up to 68.8mpg on the combined cycle, with CO2 emissions from 108g/km. For the first time in the UK, this will also be available with xDrive four-wheel drive – at 62.7mpg and 119g/km in its most efficient form.

Next year, the range will grow to include the 530e iPerformance, a petrol-powered plug-in hybrid with a 27-mile electric range and 248bhp, likely to be an important corporate car with its 49g/km CO2 emissions. A 520d EfficientDynamics Edition will also be available, returning 72.4mpg with CO2 emissions of 102g/km.

Much of the on-board technology was previewed on the 7 Series, this includes adaptive cruise control with steering assistance at up to 130mph, remote parking via the key, and the new touchscreen iDrive system with gesture control, as well as live on-street parking, a WiFi hotspot and real-time traffic information.

Full pricing has not been released yet, but this will start from £36,025 on the road.