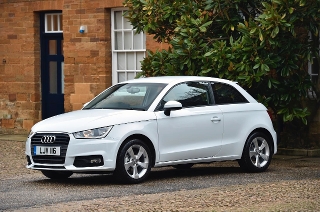 The 94bhp turbocharged three-cylinder petrol engine effectively replaces the 88bhp 1.2-litre four-cylinder engine available in the A1 since launch. It comes with a standard five-speed manual gearbox and offers a 0 to 62mph time of 10.9 seconds for both the three-door and five-door Sportback body styles. A seven-speed S tronic twin-clutch transmission is also available, and with this installed the acceleration time is also unchanged in both versions. Top speed is 116mph.

Equally importantly, the new engine can return up to 67.3mpg in the A1 when linked to the standard manual gearbox for either body style, or 64.2mpg in conjunction with the S tronic transmission, equating to CO2 figures of 97g/km and 102g/km respectively.

In comparison, the 1.6-litre TDI – still the most frugal option in the range –now benefits from an economy boost from 74.3mpg to 80.7mpg on the combined cycle test, and a CO2 reduction from 99g/km to 92g/km in both body styles.

The new three-cylinder petrol engine is available in conjunction with either SE or Sport specification, both options including alloy wheels, remote central locking, air conditioning, electric front windows and mirrors and a six-speaker single CD audio system with auxiliary iPod connection linked to a 6.5-inch retractable display. A secondary collision brake assist system, which can initiate automatic braking to reduce the risks of skidding and additional collisions during an accident, also now forms part of the standard equipment list.

The firmer sports suspension configuration, which is a standard feature of Sport models, has been revised to increase its absorbency, but customers can now choose to replace it at no extra cost with the more supple set-up of the SE versions.