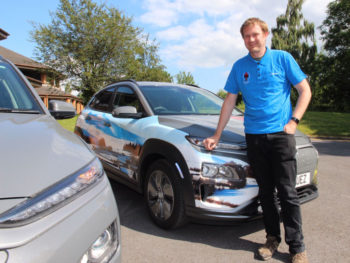 Based out of the Authority’s headquarters in Brecon, the vehicles will be used to transport staff to external meetings and for planners making site visits. Both are an identical Premium spec with the longer-range 64kWh battery pack, and feature bespoke graphics to help raise awareness of the initiative within local communities.

Unusually for the authority, the Konas were purchased outright with service plans, supported by the Welsh Government’s Green Growth Fund, instead of being leased like most of the rest of the fleet. They will be run on fleet for five years, in line with the manufacturer warranty.

Staff have acclimatised quickly, according to IT systems and fleet officer, Kevin Booker. Early users are easily getting more than 300 miles of range, despite steep local topography, and the cars are often taken out on several meetings in a single day without charging.

As a result, predicted mileage has been revised upwards – from 12,000 per year to 18,000 – which reduces the reliance on combustion-engined pool cars. Fuel costs for the Konas are roughly a third lower than for a diesel vehicle, based on a 15p/kWh electricity tariff, with further savings to come as the mix of renewable energy rises. Servicing is significantly cheaper too.

“The range was a major selling point, that’s why we went for the 64kWh battery. Electric vehicles have reached the point where they can replace any of our pool cars, because none of them cover that sort of distance in a day,” Booker explained. “In fact, we’ve made a commitment, as an organisation, that we will no longer replace pool cars with fossil fuelled vehicles from now on, and 50% of our pool car fleet is already electric.”

Chargers are already in place at its visitor centres, depot and headquarters in Brecon, and the organisation is adding solar panels to its facilities, alongside a pre-existing hydro-electric generator. “The depot generates enough electricity from solar power to drive a Kona Electric 50,000 miles per year,” Booker added.