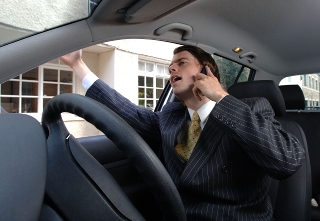 The findings form part of an ongoing study on the social psychology of road safety conducted jointly by the London School of Economics and Political Science (LSE) and tyre manufacturer Goodyear, which say that these ‘driving personalities’ emerge in different situations when drivers interact with others on the road:

Dr Chris Tennant, social psychologist, who is leading the research project at LSE, said: “From a psychological point of view, these different types of personalities represent different outlets that drivers use to deal with their frustrations and strong feelings. We are not always entirely one or the other. Depending on the situation and the interaction with others, most of us will find several of these profiles emerge.”

The personality types emerged out of the first part of the joint research project, based on focus groups and in-depth interviews. With the research, LSE and Goodyear are seeking to identify how drivers influence each other’s behaviour on the road.

Olivier Rousseau, Goodyear vice president consumer tires in Europe, Middle East and Africa, said: “Understanding what type of behaviour we exhibit and what situations provoke it is a first step for all of us to better control it, thereby creating a safer driving environment for ourselves and others on the road. Besides effective enforcement of laws against aggressive driving; education and life-long learning remain the most powerful public strategies to address this social and emotional aspect of driving and to achieve the greatest improvements in road safety.”

The second part of the project is a pan-European study across 15 countries. The final results and analysis of the European-wide study are expected in October.