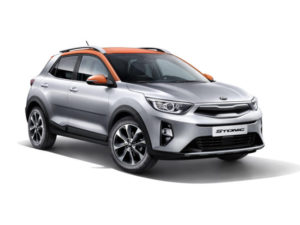 Kia says the Stonic is an important model for the company in Europe’s fastest-growing vehicle segment.
Highlights include a paint finish available in up to 20 two-tone colour combinations, with a choice of five distinctive colours for the roof. Colour choices continue into the cabin, offering a vast range of configurations and personalisation.

The car is powered by a range of lightweight petrol and diesel engines, each paired with a manual transmission, maximising driver engagement and efficiency. The compact SUV has had its steering and suspension re-tuned for Europe and goes on sale in the UK this October.

The Picanto X-Line is powered by a 98 bhp (100ps) 1.0-litre T-GDI (turbocharged gasoline direct injection) engine, which the company says is the most powerful Picanto ever. This engine will also be fitted to the GT-Line model in due course. The X-Line goes on-sale across Europe during Q4 2017, in the UK it will be available to customers in early 2018.

The Kia Sorento, the company’s seven-seat flagship SUV, is revealed for the first time ahead of global sales starting during Q4 in Europe and early 2018 in the UK.

The new Sorento is available with the company’s new eight-speed automatic transmission, which the company says helps reduce emissions. Other improvements include a range of new safety, comfort and convenience upgrades, including a new 8.0-inch touchscreen infotainment system, and a series of driver assistive safety technologies.  The upgraded Sorento is also available for the first time in new ‘GT-Line’ specification.

Stinger on-sale in Europe during Q4 2017

Now in European specification, Frankfurt is the Kia Stinger’s last motor show ahead of going on sale in Q4 across Europe and early 2018 in the UK.

The Stinger will be available in Europe with a choice of three engines: a 2.0-litre turbocharged gasoline engine, a 2.2-litre diesel engine and a 3.3-litre twin-turbo V6 gasoline engine producing 364bhp (370ps). The Stinger is the most powerful, fastest-accelerating Kia production car ever built, the company says.

The new Proceed Concept hints at the next-generation of the Kia Ceed, the company confirmed previously.