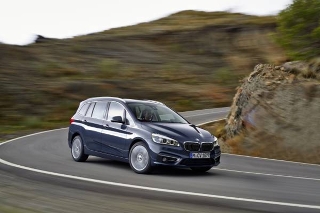 Set to debut at the Geneva Motor show, the new model is aimed squarely at mid-market offerings such as the Opel Zafira Tourer and Ford Grand C-Max.

The 2-Series GT is effectively a longer version of the 2-Series Active Tourer with a unique selling point of having an extra row of seats. It is the second BMW model to be built on the UKL platform and is as a result the second front-wheel drive vehicle to carry a BMW badge.

The top-of-the-range variant will be the BMW 220d xDrive Gran Tourer, which will be available with all-wheel drive from initial launch.

The model will be classed as an MPV-C due to its compact dimensions: it is 4,556 mm long, 1,800 mm wide and 1,608 mm high. The 2-Series GT offers practicality and utility with a luggage space that can be extended from 645 to 805 litres. With the rear seats folded down, this rises to 1,905 litres of load space.

Ensuring maximum flexibility in the use of the seating as befits its status as an MPV the middle bench of seats has a 40:20:40-split backrest, and it also allows three child seats to be fitted.

Further enhancing the model's credentials as a family wagon, BMW has introduced some novel innovations on the 2-Series Gran Tourer. The "myKIDIO" app, which will initially only be available in Germany, provides appropriate content for children and families such as films and audio books on tablets such as the Apple iPad. The app is controlled via the iDrive Controller and Control Display as soon as the mobile device is connected to the car.

Commenting on the model, IHS Automotive principal analyst, Tim Urquhart said: ‘The "myKIDIO" app that BMW is launching on the 2-Series Gran Tourer shows the audience that BMW is targeting, with young families obviously very much in the mind of the product planners. This is after the Active Tourer appeared to be aimed very much at the "silver surfer" generation, especially when the associated marketing and advertising for the model was viewed. They are the first front-wheel drive models in the BMW range and the 2-Series Grand Tourer and represent a departure both in terms of product segment and drivetrain format.

'The Grand Tourer is aimed squarely at seven-seater MPVs which are offered in the European market by traditional mid-market OEMs, such as the Opel Zafira Tourer, Ford Grand C-Max seven-seater and the Renault Grand Scenic. A lot will depend on the pricing proposition of the BMW in comparison to these mid-market models.'

With entry-level pricing in the UK starting at £24,175 for the 218SE, he added: 'This is against an entry price of £21,840 for the Zafira Tourer and £19,785 for the Grand C-Max. The C-Max and Zafira Tourer are also likely to be available with significant discounts, although there is also anecdotal evidence that significant discounts have also been available on new BMW model ranges in the last 12 months.

‘BMW's strategy appears to be to line up offerings against mid-market OEMs and take sales from these vehicles and brands, with some customers always willing to pay more for a premium badge on their vehicle. IHS Automotive forecasts peak sales of 55,000 units for the Gran Tourer, around 20,000 less than the peak of the Active Tourer. However, these vehicles also represent the most extreme examples of BMW's range expansion strategy and it remains to be seen whether BMW will continue to move into new segments. There is little doubt that a lot of these niche models will have their ROI closely attended to by product planners and company accountants and some models may be cut in the future. For example the 5-Series GT remains in IHS Automotive's forecast despite peak sales of just 24,000 units in its current cycle. Meanwhile Mercedes-Benz has quietly dropped its R-Class from its line-up as it struggled to muster sale of 10,000 units globally towards the end of the its model cycle.’