Shaun Cronin from IAM RoadSmart teamed up with the BBC’s transport correspondent Paul Clifton to help Honda to two category wins and a runner-up place at this year’s closely fought MPG Marathon. 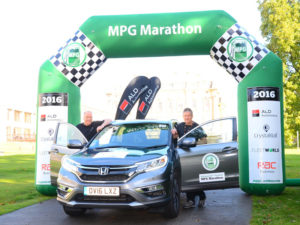 This year the pair, who were overall winners last year, won the ‘four-wheel-drive’ and ‘load lugging economy champion’ awards and took the silver medal in the category of ‘best percentage improvement – cars.’

The MPG Marathon is an intense two-day eco-driving challenge which tests the skill of the competing drivers and the real-world fuel economy of the participating vehicles to the maximum. Held on 18 and 19 October, the event saw competing teams face arguably the most challenging route and rules ever seen in the competition to plan their own routes to reach four different venues across the heart of the country.

Driving around 400 miles over the two days, teams aimed to achieve both the highest possible MPG and the most significant percentage improvement over the manufacturer’s quoted MPG figure, with penalties at stake for every minute driven over the stated total driving time.

The partnership took home the ‘four-wheel-drive’ and ‘load lugging economy champion’ awards by registering 63.77 MPG, a best-in-class 15.11% uplift on the car’s official quoted figure; and with it also second place overall in best percentage improvement on MPG. Over the two days the pair covered 389 miles, using just 27.73 litres (6.1 gallons) of fuel.

Commenting on their achievement, Cronin said: “Sipping fuel so lightly is like sipping a cup of tea! Anyone can do it. Driving with an eye to economy is not only something for the experts. We achieved a great result here; with simple measures everyone can achieve big savings to their weekly fuel bills – and who doesn’t want that!”

“That was the toughest MPG Marathon yet,” Clifton added. “Over two days we effectively climbed from sea level to the top of Britain’s tallest mountain, Ben Nevis, three times. So to beat the car’s official economy figure – and by a big margin – is very rewarding. With a very gentle right foot and smooth safe driving, this shows that even a bigger four-wheel-drive car can achieve outstanding real world economy. With fuel prices rising again, this is something everyone can do to keep costs down.”

Clifton has also passed his IAM RoadSmart Advanced Test, and this week took and passed his Masters qualification too.

Based at the Heythrop Park Resort in Oxfordshire, day one of the 2016 event saw the teams head out towards Ludlow, Shropshire, before resuming the afternoon with a trip to Stroud in Gloucestershire, then making their way back to Heythrop. The following day the teams set out for the iconic Silverstone circuit, then Hatfield, Hertfordshire, before returning once again to Heythrop.