Members of the House of Lords Science and Technology Committee have visited the GATEway Project in the Royal Borough of Greenwich as part of its ongoing inquiry into driverless vehicles. 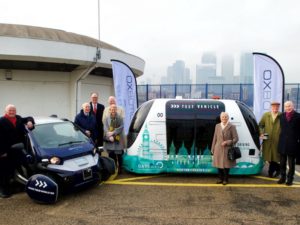 The event gave members of the House of Lords Science and Technology Committee the chance to see and test driverless vehicles.

In line with the inquiry, the Committee has been exploring the potential uses and benefits of autonomous vehicles and the transition path needed for the co-existence of autonomous and conventional road vehicles.

Members have heard evidence from government officials, academics and industry experts on how driverless vehicles will fit into the wider transport strategy, while also exploring the socio-economic aspects in the deployment of self-driving cars.

At the event held yesterday (6 December), members had the opportunity to see and test the new technology for themselves. The Committee witnessed final testing of the first GATEway shuttle vehicle ahead of public trials and experienced TRL’s portable driving simulator, MiniDigiSim. Members were also taken for a ride in the Geni, the development vehicle of GATEway partner Oxbotica, which navigates using Selenium, Oxbotica’s autonomous operating system.

The Committee’s Chairman, Lord Selborne, said: “Over the course of our inquiry we have heard compelling evidence on how autonomous vehicles can benefit society and the economy. However, if we are to realistically see these cars on UK roads in the near future, research and investment is vital. Projects such as GATEway ensure the roads are ready for driverless vehicles as well as the efficient integration of sophisticated automated transport systems into complex real world environments.”

The visit follows the House of Lord’s recent evidence session into driverless vehicles in which Professor Nick Reed, Academy Director at TRL gave evidence on behalf of the GATEway Project.