Motorway roadworks could be shortened with a relaxation on speed limits under new government plans. 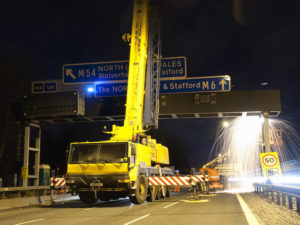 The Government plans could see speed limits for motorways with roadworks raised to 60mph.

Transport minister John Hayes has ordered Highways England to explore whether speed limits at roadworks could be “safely” increased beyond the current maximum of 50mph.

The plans would also look at limiting the length of roadworks to 10 miles and increasing the number of lanes open to aid flow.

Already Highways England is trialling a 60mph limit on a four-mile stretch of the northbound M1 near Rotherham.

Mr Hayes explained: “I have asked Highways England to look at shortening the length of roadworks to reduce the impact on road users.

“Following my discussions with them, Highways England are working towards utilising shorter lengths and looking at whether they can safely increase speed limits through roadworks, which will improve the overall customer experience and minimise disruption.

“Contraflows (utilising the opposite carriageway) and reducing lane size can be used to allow for more lanes to be opened during maintenance.”

Edmund King, AA president, welcomed the news saying: “If you look at sections like the M3 on the M25 to Basingstoke you have 25 miles of roadworks with a 50mph limit.

“It’s very difficult for drivers to concentrate over a period of time at those speeds. Shortening the length of those roadworks would make it safer and mean less people are caught out.

“Average speed cameras are increasingly viewed as cash cows because they are just raking in the money over long stretches.”

Yet the Ucatt union, which represents roadworkers, said the proposals are nonsensical and dangerous.

Acting general secretary Brian Rye said: “What the Government is proposing is a deadly version of Wacky Races. The average motorist is not capable of driving safely through coned areas at high speed.

“Anyone with a passing knowledge of this dangerous work environment knows that the British motorist routinely smashes through coned areas due to driving incompetence and when they do this our members’ lives are at risk. If they do this at an even faster speed workers will die. These proposals will make a dangerous working area twice as dangerous.”