Ford has set interim greenhouse gas emission goals, intended to help the company achieve carbon neutrality by 2050 and including its targets on vehicle electrification. 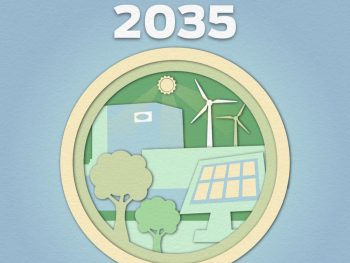 Based on the approach of the Science Based Targets initiative (SBTi), the targets see Ford pledge to reduce absolute greenhouse gas emissions from the company’s global operations by 76% and from new vehicles sold globally by 50% per kilometre by 2035.

The carmaker said the goals are in line with the latest climate scientist thinking on what’s necessary to meet the goals of the Paris Agreement.

Its new targets on vehicle electrification are central to this work. Ford announced in February 2021 that its passenger vehicle range is to go all-electric in Europe by 2030 while it will also electrify its commercial vehicle business; two-thirds of commercial vehicle sales are expected to be all-electric or plug-in hybrid by 2030.

But alongside the focus on electrified vehicles, Ford is setting new goals on making its operations more sustainable. Endorsed by the SBTi, it’s developed two targets for 2035 to reduce near-term emissions. These include reducing absolute Scope 1 and 2 greenhouse gas emissions from global operations by 76% from a 2017 base year. Scope 1 covers direct emissions from company-owned or -controlled sources. Scope 2 addresses indirect emissions from the generation of purchased electricity, steam, heating and cooling used by Ford.

Ford will also reduce Scope 3 greenhouse gas emissions from use of new vehicles globally sold by 50% per kilometre from a 2019 base year. Scope 3 includes in-use emissions from vehicles that the carmaker sells and emissions from its supply base, among others.

It’s also tackling the supply chain. Earlier this year, Ford produced a Supplier Code of Conduct, outlining the expectations and standards required of its supply chain partners, and also became the first American automaker to join the Initiative for Responsible Mining Assurance (IRMA) for the responsible sourcing of the raw materials used in automotive production. Ford’s supply chain activities are being audited by the Responsible Business Alliance with regards to corporate social responsibility.

In Europe, Ford is now a lead partner of ‘DRIVE Sustainability’, an automotive manufacturers’ initiative to address ethical, environmental and labour rights issues at all levels of the supply chain.

“We will lead in achieving carbon neutrality because it’s the right thing for customers, the planet and for Ford,” said Bob Holycross, chief environment and sustainability and safety officer, Ford Motor Company. “Ninety-five per cent of our carbon emissions today come from our vehicles, operations and suppliers, and we’re tackling all three areas with urgency and optimism.”

Previous: Drivers of all ages should have regular medical checks, says GEM
Next: EV-specific tyres not mandatory but preferable, say experts