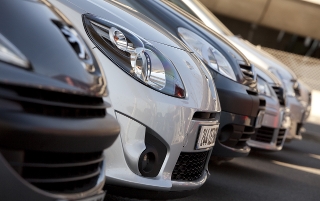 The data also shows that buyers’ appetite for British-built cars is on the increase, meanwhile, with 13.9% (around one in six) choosing a UK-manufactured vehicle so far this year – the highest level in five years.

SMMT data also shows that June marked the 40th consecutive month of growth in the market with an overall 12.9% increase in the month to 257,817 units.

The SMMT added that a significant feature of recent months has been a strong surge in demand for alternatively fuelled vehicles, and this was once again the case in June with volumes rising 70.9%.   Mike Hawes, SMMT chief executive, said, "It is still a great time to buy a new car in the UK, and it is encouraging to see more consumers choosing British models. This is important for the wider economy with 799,000 people now employed across the UK automotive sector, including retail. We anticipate a flatter second half of the year as the market finds its natural running rate."

David Raistrick, UK automotive leader at Deloitte, said of the figures: “This time last year, we saw an increase of more than 13,000 in new car sales in the UK compared to 2013. The fact that an additional 29,000 cars have been sold in June 2015, taking total new car sales for the month over 257,000, is further testament to the strength of the recovery in the UK economy. The new car market recovery, having been initially supported by the private consumer, is now being driven by the fleet sector. This is up 13.1% as business invests in the renewal of fleet stocks.

“The total new car sales are now reaching a peak, and we would expect limited additional growth when looking at the size of the UK car parc. This does not indicate problems in the market, and simply demonstrates that in reality, there are only a limited number of new cars that the market can absorb per annum.

“With there being little sign that the UK will see a significant interest rate rise in the near future, the anticipated slow-down in the rate of new car sales is likely to be gradual. After all, by taking advantage of the attractively benign finance market, car buyers may still be persuaded to change their vehicles earlier than they would otherwise do.

“As last month’s figures showed a decline in new car sales for both Germany and France, two of the largest European markets, motor manufacturers will be hoping that the UK maintains its current sales volumes. They will also hope that government support in Spain for the automotive market continues through the extended “scrappage” schemes. The French and German markets appear to have reacted more immediately to the problems being experienced in the Eurozone. In comparison, some of the countries which have experienced difficulties over the past few years – Italy, Ireland and Portugal among them – are showing strong growth this year.”