Renault is to open order books for its facelifted Kadjar next month, introducing a new engine-range and a revised trim line-up. 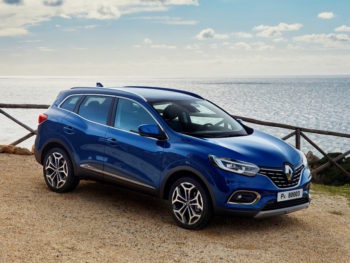 Priced from £20,595 OTR and starting deliveries in February, the updated model gets Renault’s latest 1.3-litre turbocharged four-cylinder TCe petrol engine, developed by the Alliance in cooperation with Daimler. It’s offered in 138bhp and 158bhp variants, married up with a choice of six-speed manual or seven-speed EDC auto for the former and the manual gearbox on the latter.

Renault has also updated the 1.5-litre Blue dCi 115, which gets slight power and torque increases and uses  Selective Catalytic Reduction (SCR) technology. It’s offered in two or four-wheel drive. Emissions start from 117g/km for the diesel and 126g/km for the TCe 138bhp petrol. A 1.7-litre dCi 150 will be offered in the future with manual gearbox only and 2WD or 4WD formats; emissions are yet to be confirmed.

Renault has also updated the trim line-up, using its Easylife streamlining philosophy seen on other models. The Kadjar now gets four trims, replacing the previous five and made up of the familiar Play, Iconic and GT Line trims plus a new S-Edition model.

The S-Edition model is focused on style and sits between Iconic and GT Line, and brings unique interior upholstery with blue stitching, full LED headlights and front and rear skid plates in light grey.