The Government has extended the deadline for its consultation on Vehicle Excise Duty, intended to help drive lower-emission vehicle take-up. 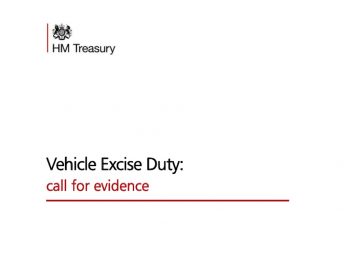 Announced in the Budget on 11 March 2020 and opened the same day, the consultation was originally due to close on 3 June 2020 but has now been extended to 3 September 2020 to give stakeholders more time to reply due to the coronavirus pandemic.

It follows last year’s call for evidence on changes to vehicle taxation as a result of the shift to WLTP, which saw new rates announced for company car tax in July 2019 but changes on VED were shelved as the Government said a call for evidence would seek “views on moving towards a more dynamic approach to VED which recognises smaller changes in CO2 emissions”.

Since 2001, VED liabilities have been calculated using emissions bands. However, there is evidence to suggest that this approach has limitations in the extent to which it incentivises the take-up of lower-emission cars; firstly, because the bands create a ‘cliff-edge’ system that does not reward manufacturers for improving their vehicles’ efficiency within bands, and secondly the differentials between band rates are uneven, meaning any given gram of carbon at the lower end of the tax bands is treated differently to a gram of carbon at the higher end of the bandings.

Further considerations include methods to enhance the environmental incentives of first-licence VED. Under the current VED system, there is a differential of over £2,000 between the highest and lowest-emitting vehicle: zero-emission models pay no first-year VED.

To enhance the impact of incentives within first-year VED, the Government could consider policy options, such as increasing first-licence VED for more polluting vehicles to discourage car buyers from purchasing higher-emitting vehicles; or introducing a granular VED system, as mentioned.

The Government is also interested in policy options to strengthen the link between VED liabilities and carbon emissions after year one. This could be done by introducing multiple standard rates for vehicles after first registration that reflect carbon emissions, such as a zero-rating for zero emission vehicles, a lower rate for vehicles with emissions from 1 to 150g/km, and a higher rate for vehicles with emissions exceeding 151g/km. Other considerations include extending first-licence VED for an additional few years and abolishing the standard rate, and instead linking annual VED liabilities to the first licence charge.

Further areas under consideration include whether the signal to purchase RDE2-compliant diesel cars strong enough, if the Government should continue to take account of NOx emissions if it reforms the VED system and whether motorcycles should be taxed based on carbon emissions.

For more details on the consultation, click here. Responses should be submitted to [email protected]