Citroën has halved the number of trim levels available for its C3 supermini as it places focus on the most popular, higher-level specifications. 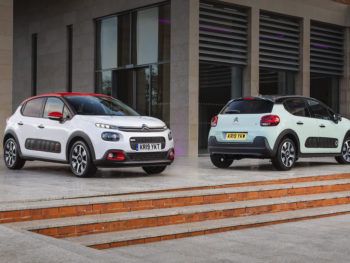 Launched in January 2017, the current C3 is the brand’s best-selling model in the UK with over 42,000 sales since launch. However, 62% of these sales have been for the top two ‘Flair’ and ‘Flair Nav Edition’ trim levels.

The revised range, which takes effect from October 2019 production, will no longer feature the entry-level ‘Touch’ trim level, whilst the ‘Feel Nav Edition’ also ceases production; a move said to be partly due to the strength of the ‘Origins’ Collector’s Edition introduced earlier this year. Citroën has also amalgamated the previous ‘Flair’ and ‘Flair Nav Edition’ versions with one ‘Flair Plus’ model that combines the wider engine and gearbox choice of outgoing ‘Flair’ models with the enhanced specification of ‘Flair Nav Edition’.

The changes mean the C3 will now be offered in just three trims – ‘Feel’, ‘Origins’ and ‘Flair Plus’.

Priced at £15,860 for the PureTech 83 S&S manual and £18,260 for the BlueHDi 100 S&S five-speed manual, the entry-level ‘Feel’ specification will offer 16-inch alloy wheels, MirrorScreen with Apple CarPlay and Android Auto, lane departure warning, automatic air-con, seven-inch colour touchscreen and a choice of up to four optional roof colours (including body colour).

The ‘Flair Plus’ trim brings features including the ConnectedCAM Citroën integrated camera system, Citroën Connect Nav, leather steering wheel, colour reversing camera, dark tinted rear windows and the ‘Urban Red’ interior design. This trim is offered with the PureTech 83 S&S manual, the PureTech 110 S&S with six-speed manual or EAT6 auto and the BlueHDi 100 S&S five-speed manual and is priced from £17,625.

At the same time, the C3 will receive a number of technical changes to boost efficiency, including the introduction of a high efficiency alternator, an air inlet shutter and a variety of hidden underbody panels to reduce drag plus new ‘A-Class’ low rolling resistance tyres.

The updated Citroën C3 range can be ordered now, with first deliveries starting from late October 2019.

Previous: New smart solution enables EV drivers to store and use renewable energy
Next: Why fleet managers are the stormtroopers in the battle to save the planet