Citroën has previewed its new 19_19 electric and autonomous concept car, intended to show “ultra-comfort at the service of tomorrow’s mobility”. 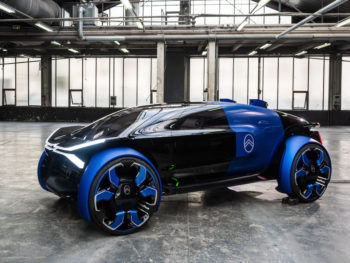 Unveiling later this week in Paris as part of the brand’s centenary celebrations, it follows the Ami One urban electric concept shown at Geneva this spring but places focus on providing advanced levels of comfort whilst also offering long-range electric and autonomous capabilities.

Not expected to go into production, the rather radical electric concept features a fully glazed cabin suspended on a new suspension system that uses ‘Progressive Hydraulic Cushions’ combined with smart active control, oversized wheels and a long 3.1m wheelbase to bring a ‘magic carpet’ ride. It also features autonomous driving technologies and a proactive ‘Personal Assistant’ that interacts with passengers.

Linda Jackson, Citroën global CEO, said: “19_19 Concept is our technological and innovative vision of the automotive future. It conserves the fundamentals that have made Citroën what it is over the last 100 years, a brand that listens to its customers and systematically focuses on human aspects, consistent with its ‘Inspired by You’ brand signature. Design, creativity, comfort and innovation are and will remain central to Citroën’s DNA, as demonstrated by 19_19 Concept.”

Previous: Zero to hero: How electric bikes are pioneering the EV market
Next: Today in Fleet – Monday 13 May