By Craig Thomas / 2 years ago / Features / No Comments

As we head into a decarbonised future, what is the fate of the filling stations where we currently fill up on fuel? Craig Thomas looks at how forecourts could transform. 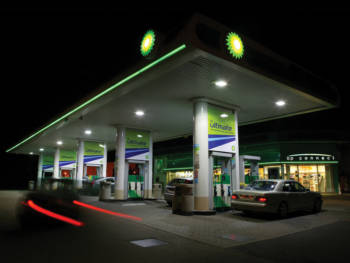 Filling stations have played to consumers’ desire for convenience

We’re all ready for a period of huge upheaval, right? It’s become something of a mantra that the next few decades will prove to be a period of huge change, as the decarbonisation of road transport and automation change what we drive, how we drive or even if we drive. The publication of the Government’s Road to Zero Strategy earlier in the summer cemented existing predictions about how quickly we’re going to have to transition out of petrol and diesel vehicles and into plug-in hybrid, hydrogen and battery electric vehicles: 2040 is the date we’re aiming for, but ambitious targets for 2030 are also now being mooted.

Everything about our experience of using cars and vans is going to change. How quickly that change takes place is open to debate, but there’s little doubt that the times they are, as Bob Dylan put it, a changin’. Many of our driving routines and habits will also change, including visits to a filling station once we no longer need fuel to feed an internal combustion engine.

Indeed, the filling station should itself become redundant, a roadside remnant of times past. No fill-ups, no filling station. After all, it’s a declining sector, anyway: in 2000 there were around 14,500 filling stations in the UK, which has shrunk to around 8,400, with 300-400 closing every year, up until five years ago. There’s clearly no future in fuel.

Well, not necessarily. The rate of filling station closures has eased and the Petrol Retailers Association (PRA) estimates that 2018 will see fewer closures than at any time since the turn of the millennium. And the potential for a change of use as sales of petrol and diesel fall, offers the sector a chance to get some of that disruption action that everybody seems to be talking about these days.

Filling stations are already changing, offering a range of additional services in response to the changing habits of their customers. As Brian Madderson, chairman of the PRA, explained to us: “The consumer has changed their shopping habits a lot. Our members have been able to latch on to this change and over 60% of the independents now have some form of single-branded convenience store in their forecourt.

“So whereas 10 years ago the fuel was the prominent provider of margin for the business, that’s no longer the case. The shop now often provides more margin to the business than fuel.

“Across the UK, they’ve been able to reinvent themselves and become not just a refuelling station. In the old days, they used to have a tiny little shop: you might remember a kiosk selling lubricants and chewing gum. Then they became slightly bigger with CTN (confectionary, tobacco, and news). Today they’re even bigger, as full-blown 24-hour, seven-day-a-week convenience stores.

“A lot of them sell alcohol. A lot of them have cash machines. And a lot of them even have some kind of food-to-go franchise like Subway, Gregg’s, Starbucks, Costa Coffee, or Burger King, so today’s modern filling station is satisfying a lot of their customers’ desires.”

Filling stations have played to consumers’ desire for convenience – which has been a profitable exercise for them: forecourt shoppers trend to prioritise convenience over price, so fuel retailers are often able to generate double the margins of their high-street counterparts, according to research from Investment Week.

So we’ll continue to go to filling stations, because they’re a habit, a convenient place for us to visit to fulfil a range of needs. But will we still be refuelling there? Madderson thinks that petrol and diesel will still be offered for some time to come.

“At the moment, there isn’t any money to be made out of electric vehicles and charging them,” he told us. “So the forecourts are selectively putting in charging points, or the means to put in charging points if they’re building new sites, or knocking down and rebuilding old sites. Relatively few are putting in charging points on existing sites because they’re concerned that these could take away parking space for real customers, i.e. people who are going into the shop and consuming food if it’s a food-to-go operation, or into the shop to buy convenience food.

“Some of the motorway service areas now have charging points. Welcome Break has a lot invested in charging points for Tesla vehicles right across their portfolio. And they’re hardly used. There’s a long way to go before this alternative fuels market really takes off.”

BP is one fuel company that isn’t taking any chances, though. In June, it announced that it was buying Chargemaster, the UK’s largest electric vehicle (EV) charging company.

At the time of the purchase, Tufan Erginbilgic, chief executive of BP Downstream, said: “At BP we believe that fast and convenient charging is critical to support the successful adoption of electric vehicles. Combining BP’s and Chargemaster’s complementary expertise, experience and assets is an important step towards offering fast and ultra-fast charging at BP sites across the UK, and to BP becoming the leading provider of energy to low-carbon vehicles, on the road or at home.”

The philosophy underpinning the deal is that BP believes that as adoption of EVs accelerates over the next decade and beyond, drivers will need access to conveniently located fast and ultra-fast charging stations. With over 1,200 service stations across the country, BP thinks that its UK retail network is well positioned to provide the access that drivers will want. The new BP Chargemaster brand is therefore planning the rollout of an ultra-fast charging infrastructure, including 150kW rapid chargers capable of delivering 100 miles of range in just 10 minutes, with the first chargers on forecourts appearing in the next 12 months.

In order to facilitate these rapid chargers, there will have to be changes to the electricity supply infrastructure, too.

National Grid is already looking at what the impact an increase in electric vehicles will have on power supply. Pete Abson, public affairs and policy senior manager at the National Grid, spoke recently at a Renewable Energy

Association event about the organisation’s plans to facilitate the expansion of charging. It realises that home charging won’t suit all EV drivers, so it’s looking at enabling infrastructure changes that will make more destination charging possible. Upgrading the supply at locations such as motorway service stations is one aim, enabling them to be sufficiently future-proofed for 350kW ultra-rapid fast chargers to be built in the future. Who pays for these upgrades is, however, still unclear at the moment.

Of course, BP – and the other fuel suppliers, such as Shell with its Recharge service, that are also investing in EV charging – will want drivers to stay longer than 10 minutes, so we could see petrol stations being redesigned to offer even more services. A greater emphasis could be placed on tempting drivers out of their cars, with the likes of Amazon lockers, dry cleaning and pharmacies, all of which have been trialled recently.

And fleet drivers could be attracted by business services such as meeting rooms or quiet rooms that can be used to make phone calls, or catch up on emails that have arrived in inboxes since setting off on the road.

Whatever shape filling stations take – and whatever services they offer to drivers – in our zero-emission, decarbonised future, you can be sure of one thing: there will be plenty of opportunities for us to continue spending money at them.