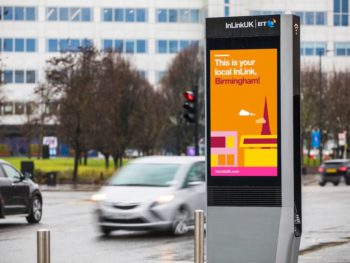 The cities have become the first in the country to deploy the new air quality measuring function alongside a range of other digital services on the InLinkUK digital ‘hubs’.

The InLink units now offer an air quality measuring function that makes use of the InLinkUK digital ‘hubs’ modular sensors to collect air quality data and send it over the InLinks’ ultrafast integrated WiFi, enabling councils to monitor air pollution in the area.

The units have been initially introduced in Birmingham and Bradford, where the air quality data is being made available for analysis by Bradford Council and a group of researchers and scientists in Birmingham, led by the University of Birmingham, to help monitor air pollution in the area.

Professor William Bloss of the University of Birmingham, who leads the WM-Air project, said: “There is a pressing need for more detailed measurements across cities such as Birmingham to deliver clean air science. It’s important for us to understand the levels of air pollution in the city as it can have a huge impact on the health and wellbeing of people who live and work here.

“We are exploring use of the new BT sensors alongside a number of initiatives we already have in place to measure air pollution and improve air quality.”

The air quality measuring features are also being made available to other councils over the coming months.