Boris pledge on EV charging is ‘step in the right direction’

A pledge by Boris Johnson to tighten up the UK’s charging infrastructure has been greeted as a “step in the right direction”, with further work needed to ensure a ‘clean energy revolution’. 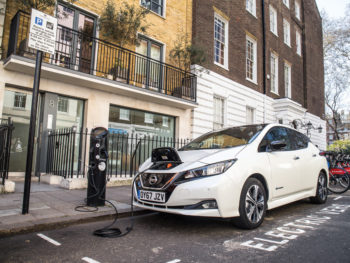 Speaking last night (13 November) Johnson said a future Conservative government would ensure every household was within 30 miles of an electric vehicle charging point through a £500m investment in a “fast-charging network”; part of major investments in green technologies, including increased use of offshore wind power generation.

Johnson also said that UK innovation would enable the nation to deliver on 2050 net zero targets and revealed plans for an £18bn investment in R&D and technology.

In response, Simon Daniel, CEO of smart battery and EV charging software firm Moixa, said: “Regardless of the outcome of 12 December, the UK must lead the world as a smart energy island, showcasing how electric vehicles, low carbon electricity, batteries and artificial intelligence can deliver on the 2050 goals. With 35 million electric vehicles, the UK will have hundreds of GWhs of batteries that can be managed intelligently to store and shift renewable energy, keeping costs down and the lights on.”

Meanwhile Seán Kemple, director of sales at Close Brothers Motor Finance, said the pledge on electric vehicle charge points was a good start, but also a natural milestone on the road to meet the ambitions set out in the Government’s ‘Road to Zero Strategy’.

He added: “The 30-mile gesture points to the historic imbalance of investment in the regions compared to major cities. The real question now is whether 30 miles is a drastic enough improvement on what already exists, and whether it will be sufficient to overcome issues of range anxiety holding some consumers back from taking the leap to an electric car. However, it is a step in the right direction which, alongside commitment from manufacturers, should help to make the alternative fuel vehicle vision a reality.”

Research carried out by Close Brothers Motor Finance found that two in five drivers are considering an electric vehicle next – an increase of 7.5 million drivers in the past two years.

Kemple added: “2019 may be remembered as the year when electric vehicles went mainstream. While sales are still relatively low in real terms, the speed of growth is accelerating, and it looks like we’re months, not years, from the tipping point. Consumers are becoming more aware of the benefits of AFVs or an electric vehicle – from environmental protection to lower costs of running a car after the initial outlay – and manufacturers are responding to this demand. The overwhelming number of EVs and AFVs on display at the Geneva Motor Show is evidence of this.

“Education is needed to help customers overcome their concerns about range, charging time and costs, and this sits with the Government and manufacturers alike. The Government should also steer its focus towards developing the infrastructure needed to meet the needs of rising demand, from charging points outside of the big cities to solutions for customers with on-street parking.”

“Clearly the next couple of years present an opportunity to win the trust of an unsure market. As confusion around fuel types increases, so too will customers’ reliance on trustworthy advice, and this is where the expertise of the dealer comes into play. There is plenty to suggest that dealers with a good understanding of the marketplace and the right stock on their forecourt can expect to do well in these uncertain times.”

And Adam Bond, CEO of Surrey based hydrogen power company AFC Energy, also welcomed Boris’s commitment but added: “However, with an aspiration of charging facilities ever 30 miles, we cannot forget the investment challenge this brings to local electricity grids or to areas where the grid does not extend. A rapid uptake in the number of EV charging demand could in time require the equivalent of 8 new Hinkley Point nuclear power stations and a material investment to local grid infrastructure where there is already a struggle to meet localised EV demand. In order to properly satisfy the projected surge in demand, the next government must invest or provide fiscal incentives for private investors to develop and operate grid independent, decentralised alternatives such as zero-emissions hydrogen power charge systems.”