Altrad Services UK has made dramatic improvements to its fleet’s driving practices, slashed incident rates and almost halved its costs from fines and repairs with the use of latest vehicle telematics. 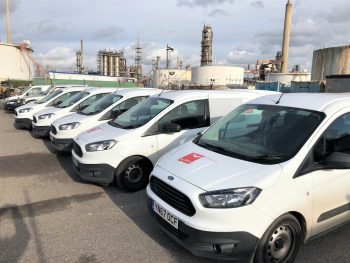 The firm, which provides industrial services to the oil and gas industry, runs a 1,400-strong fleet of vehicles and initially installed Trakm8 tracking, driver behaviour scoring and vehicle health alerts on 300 of its light commercial vehicles, before rolling out the solution.

Not only has this had a positive impact on drivers but spending on fines and vehicle repairs has fallen 40% over the same period.

Altrad said the introduction of Trakm8 tracking devices had given its fleet managers access to valuable data, allowing them to introduce a company-wide initiative to combat poor driving and spread best practice throughout the fleet.

Matthew Hammond, head of fleet, plant and equipment, said: “By partnering with Trakm8 we have been able to bear down on incidents in a way that is at once incredibly effective in reducing incidents and has a positive impact on our fleet workforce. What is unique about Trakm8’s product is its data insights for fleet managers coupled with its friendliness for our entire driving team.

“While fleet managers have access to a powerful tool, it’s also incredibly easy to get data out of the system and use it in our own comprehensive driver support schemes. And drivers are presented with easy to understand statistics that incentivise best practices, with an app they can download to track their score. The data allows us to engage with drivers in a positive way as we can now better understand when an incident is an opportunity for driver training or simply a driver utilising their best judgement in a high-risk situation, and then involve the driver in the solution, instead of making them the problem.”

The benefits of the technology have had a wider bearing too.

Hammond continued: “While the Trakm8 system has allowed us to reduce costs from incidents, its real value-add is immeasurable: when motorists interact with our fleet on the road, they are now significantly more likely to come away with a positive interaction where our driver drove safely.

“As a result of the significant improvements we’ve made using the Trakm8 system, we’re seriously examining where else we can integrate Trakm8 technology into our fleet to allow us to deliver a better service to our customer base.”