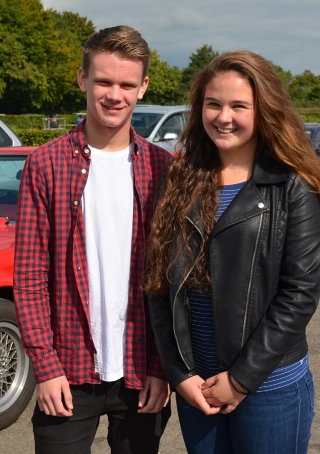 Astonishingly, Eloise Peabody-Rolf, 17, and Rory Carmichael, also 17, have been driving since the age of 11 as members of The Under 17 Car Club, a national road safety charity which teaches young people to drive to a high standard before they are allowed out on a public highway.

In that time, the pair of young drivers have driven more than 300 vehicles ranging from an Aston Martin to a 44-tonne articulated lorry.

In this year’s Marathon, which takes place on Tuesday 29th and Wednesday 30th of September, over a two-day 300-mile route across the Oxfordshire/Wiltshire countryside, they will be competing in a Honda Civic 1.6 i-DTEC with fuel consumption, on the combined cycle, of 78.5mpg and CO2 emissions of 94g/km.

And they will go head-to-head with their driving instructors, Paul Clifton, the BBC’s transport correspondent for southern England, and former police inspector, Shaun Cronin who was responsible for the roads policing team in Dorset. They will be driving a Honda CR-V with exactly the same engine as their pupils.

“Rory and I are very excited to be competing in the MPG Challenge, and greatly appreciate the fantastic opportunity Honda is giving us,” said Eloise, who is currently studying for A-levels at Portsmouth Grammar School and will be the main driver.

“It will certainly be a new experience as neither of us have ever competed in such an event before, let alone tried ‘economy driving’.

“Having driven with The Under 17 Car Club since I was 11, I’m really looking forward to the challenge. I hope we will be able to demonstrate that you don’t have to be a particular type of person to participate in such a competition,” said Eloise.

“We will certainly be trying our hardest to achieve the best MPG we can. And we are particularly keen to give our greatest rivals – two of the Club’s instructors – a run for their money!” she added.

“The Car Club, and Honda UK, would very much like to demonstrate that youth is no bar to good, safe, economical driving; what matters is the right training and, above all, the right attitude behind the wheel.

“Eloise and Rory will be up against some of the best professional drivers in the country, proven experts at ultra-economical driving. They are in a standard Honda Civic 1.6 diesel, which neither has driven before. Two weeks before the event, Eloise had not even driven on a motorway,” he said.

Event organiser and Fleet World publishing director, Jerry Ramsdale, commented: “We are delighted that Eloise and Rory are entering this year’s MPG Marathon as our youngest-ever entrants and we wish them all possible success. Age should be no barrier to economical driving, and it will be fascinating to see how they fare against far more experienced drivers.”

They will certainly face some stiff competition. Reigning champions, Fergal McGrath and James Warren, have again entered the event where they are likely to go up against the previous year’s winners, Nick Chapman and Rosemary Horner, both employees of Leicestershire County Council.

Last year, Honda engineers McGrath and Warren expertly guided a Civic Tourer 1.6 i-DTEC around the 330-mile route, in an outstanding 97.92mpg. They finished only fractions of a gallon ahead of the Leicester pair, who achieved an average of 97.08mpg driving a 1.6 litre TDCi Ford Fiesta Titanium ECOnetic.

This year, McGrath and Warren are again in a Honda Civic Tourer 1.6 i-DTEC as they attempt to retain their hard-won title and, in doing so, become only the second pair of drivers to win the event two years in a row.

This year’s MPG Marathon, in its 15th year, is being sponsored for the first time by Barclaycard Fuel+ in association with TMC, and sets off from the stunning Heythrop Park Hotel and the Heythrop Park Resort near Enstone in Oxfordshire.

Car makers entering include BMW, Caterham, Ford, Peugeot, Renault, Citroen, Honda, Mazda, Kia and Jaguar, who have confirmed they will be entering their very latest models for the event.

Other drivers include Ben Wilson, this year’s ‘Patrol of the Year’ from sponsor, RAC, who will be participating in the Mercedes Vito van that he uses every day in the course of his patrol duties.

Electric and hybrid vehicle classes will again be included, and they will be joining the more familiar diesel and petrol engined cars and vans that traditionally take part in the event.

Previous: Numbers of killed and seriously injured road casualties rise in over half of police force areas
Next: Diesel car values rise by £200 more than petrol models