Volkswagen has revealed its I.D. electric car at the Paris Motor Show, previewing a new generation of electric vehicles. 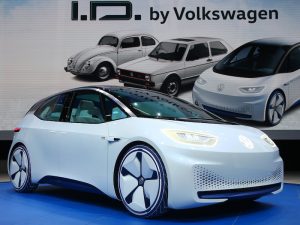 The Volkswagen I.D. will be launched as a compact electric car in 2020 parallel to the Golf

Playing a major part in the carmaker’s plans to become a global market leader in electric mobility, the I.D. goes into production in 2020 and will be the first VW to be based on the newly developed Modular Electric Drive Kit (MEB), which will also be used to develop electric versions of models including the Polo, Golf, Tiguan and Passat.

Dr Herbert Diess, chairman of the Board of Management Volkswagen Brand, explained: “In 2020 we will begin to introduce an entire family of electric vehicles on the market. All of them will be based on a new vehicle architecture which was specially and exclusively developed for all-electric vehicles. Not for combustion engine or plug-in hybrid vehicles. The I.D. stands for this new era of all-electric vehicles, for a new automotive era: electrical, connected and autonomously driving.”

Using a new drive concept architecture with an electric motor on the rear axle and a high-voltage battery in the vehicle floor to bring about increased space, the I.D. will offer the space of a Passat despite being shorter than a Golf.The I.D. will be powered by a 167bhp electric motor, offering a range of between 249 and 373 miles and a price said to be on the level of today’s Golf with comparable power.

It also showcases new autonomous driving features that will be on offer from 2025 as well as new connected car technologies. In the future, VW drivers will be given an individual user identity that stores such information as personal seat and climate control settings, favourite radio stations and play lists, settings of the sound system, contact data for friends and business partners and the navigation system configuration.