Fleet values in the used car market fell in Q1 as average mileage and age increased in the wake of contract extensions resulting from last September’s WLTP implementation. 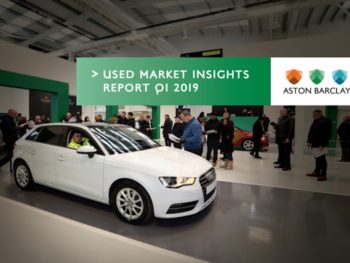 The higher CO2 figures seen under the new testing regime, along with shortages of WLTP-compliant vehicles and continued uncertainty over future company car taxation, has seen large numbers of fleets extend leases. As a result, Aston Barclay’s latest Used Market Insights Report shows that average age and mileage in the fleet sector for Q1 was up by 0.7 months to 42.5 months and 9.8% to 54,013 miles respectively. This caused prices to fall by £486 quarter-on-quarter to £9,523 – however, year-on-year fleet prices are still up by 3.5% (£325).

Q1 also brought price reductions for the late and low vehicle sector, with average prices reduced by £1,005 in Q1 to £14,243, compared to Q4 2018’s record high of £15,248, mainly to right themselves against the highly competitive new car offers leading up to the March plate change.

Commenting on the findings, Martin Potter, group managing director of Aston Barclay, said: “Q1 2019 has again proved the resilience of the used car market and there are further signs that EVs and hybrids are gaining in popularity, although volumes in the auction hall are still low.

“Q2 is likely to be slightly trickier for the used car market faced with the start of the bank holiday season, and the additional volume coming into the wholesale market from a strong March plate-change which traditionally causes pressure on pricing.”