Where next for the combustion engine? 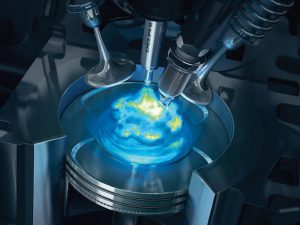 The biggest issue facing car companies is the Real Driving Emissions (RDE) tests, which are going to be phased in from September 2017.

The biggest issue facing car companies is the Real Driving Emissions (RDE) tests, which are going to be phased in from September 2017. Diesels, in particular, are heavily reliant on their aftertreatment systems, which work best in a relatively narrow band of operating conditions.

That means it’s going to be far harder to achieve the required results outside of the current laboratory conditions.

“It’s a significant challenge to meet the RDE emissions with a diesel engine,” comments Adrian Greaney, director of engines at Ricardo. “That’s being addressed, but it will have cost implications.

At the same time there are some quite significant efficiency improvements coming through on petrol engines.

For fleet operators that means they will have to clock up a higher annual mileage to merit the upfront cost of diesels.”

Selective catalyst reduction (i.e AdBlue) systems are set to become more common on diesels, but that’s not all.

There’s a lot of research into lean burn petrol engines, which use techniques such as corona discharge ignition to allow the engine to operate at very high air-to-fuel ratios. The downside is that this increases NOx production, so we could well see SCR systems coming to petrol engines.

The good news is that they should be able to regenerate passively during normal driving, so it’s unlikely that we’ll see a repeat of the DPF issues encountered on diesel engines.

The boundary between petrol and diesel is likely to blur in other respects. Manufacturers have been experimenting with gasoline compression ignition (GCI) concepts for over a decade. Essentially, this comes down to burning petrol in a diesel-like process, offering the relatively clean chemistry of petrol combustion with the inherent efficiency of diesel’s compression ignition. The downside is it’s quite tricky to control, so we may even see dual-fuel engines, where a small amount of diesel is injected to precisely trigger the combustion of petrol or natural gas.

In the more immediate future, some manufacturers are turning to the Atkinson or Miller cycles, where advanced valve timing is used to extend the expansion stroke relative to the compression stroke. This requires reasonably sophisticated valve gear, but it’s possible with a conventional petrol engine. There are more radical options ahead. Split-cycle engines, for instance, pair the cylinders – using one for compression and one for expansion with a port between the two.

This allows the engine to fire once every rotation (as opposed to every other rotation with a normal four-stroke). In theory, this could lead to a step change in efficiency, but it will be decades away if it ever happens.

There’s no doubt that electrification will play a major role, but not always in the way that you might think. We’re already beginning to see an increase in the number of micro hybrid systems. These don’t capture enough energy to assist with the propulsion, but they can be used to power various electrical systems on the car at far lower cost than a full hybrid system.

One of the most promising options is electrically-assisted turbocharging.

There are a number of ways of doing this, but the most popular route so far – as seen on the Audi SQ7 – is to use a small electric compressor to aid one or more conventional turbochargers. The idea is not generally to run the compressor all the time, but rather to provide an instantaneous boost while the turbochargers are spooling up.

“These e-boosters basically aid the response of conventional turbochargers at low-speed, low-load conditions,” explains Chris Brace from the Advanced

Propulsion Centre. “That’s really important, because transient response is one of the main limitations on how far you can downsize a turbocharged engine.”

Proof of just how far you can go with electrically-assisted turbo-downsizing is provided by the Volvo S60 Drive-E demonstrator from 2014, which produced 450 hp from a 2-litre inline four.

Don’t underestimate the value of data.

Fleet operators have already reported considerable benefits from using telematics monitoring systems like Ashwoods Lightfoot. In the future this could go a step further with ‘virtual horizon’ systems synchronised with the vehicle’s route.

“If you’ve got a hybrid system you can manage the energy storage much more efficiently if you know the route ahead,”

Brace explains. “Say, for example, the car knows it’s going to drive down a long hill with no traffic in a couple of miles’ time.

That means it will have the opportunity to charge the battery so it could perhaps rely more heavily on electric propulsion in the meantime.

“It could also help to manage the emissions control more efficiently. For instance, scheduling DPF regenerations or urea injections at the optimum points could help to reduce fuel consumption and servicing requirements.”