Drivers of the bigger pick-ups now on the UK market could face fines if they don’t stick to LCV speed limits. 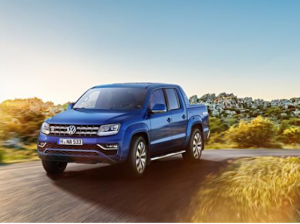 Double cab derivatives of the latest pick-ups can exceed the legal 2,040kg unladen weight classification for dual-purpose vehicles, meaning they are no longer covered by passenger car speed limits

The warning comes from Arval, which is warning fleet managers to warn their drivers accordingly.

The fleet management and leasing specialist says that new market entrants such as the most popular double cab derivatives of the latest Ford Ranger, Toyota Hilux and Volkswagen Amarok can exceed the legal 2,040kg unladen weight classification for dual-purpose vehicles – this means they are no longer covered by passenger car speed limits, indicating that drivers should go no faster than 50mph on single carriageways and 60mph on dual carriageways – although the standard urban 30mph and 70mph motorway limits continue to apply.

The firm added this poses a potential concern for fleets as these vehicles are often bought as an alternative to a regular passenger car.

Eddie Parker, commercial vehicle consultant at Arval UK, said: “Pick-ups sold in the UK have been getting bigger and heavier for several years, driven by demand for increased payload from both fleet and domestic buyers.

“The result of this is that, at least technically, they have become light commercial vehicles in the eyes of the law and should be sticking to the lower speed limits.

“Confusingly, there is also a possibility that individual examples of the same model might fall either side of the 2,040kg limit because of the fitting of optional equipment such as pick-up tops that are needed for some fleet applications.

“It is definitely a grey area and one of which fleet managers operating pick-ups should be aware.”

Parker added that Arval had contacted the DfT about the issue, who had conceded that the classification of some pick-ups may need to change in the future but that this could require a legal challenge to take place.

He concluded: “Our general advice would be that, where there is any doubt, it is probably best to advise your pick-up drivers to adopt the lower limits. There is little to be gained from potentially having to fight a test case if one of your vehicles is prosecuted for exceeding the speed limit.”