Volkswagen is to launch an all-new premium saloon from next year that brings sleek new styling and could mark a rebrand of the former CC. 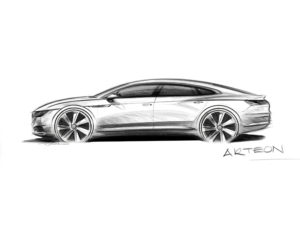 Dubbed the Arteon, the new model is revealed in a design sketch ahead of its debut at next spring’s Geneva Motor Show and is believed to show the replacement to the CC – a stable of the fleet market.

Due on sale in summer 2017, the Arteon will sit above the Passat as with the current CC and brings a “highly expressive, horizontally accentuated brand look”. The front is dominated by a large grille that extends into the three-dimensional front headlights and also gains LED lighting. It will also get frameless windows and a top-hinged and wide-opening tailgate along with a huge boot.

VW hasn’t released any technical specifications, however it’s likely that the Arteon will bring a line-up of 2.0 TDI engines and a possible GTE version.

Previous: UK second for premature deaths from NO2 pollution in Europe
Next: Applied Driving Techniques to expand global presence under new appointment