Mid-range versions of the eighth-generation Golf hatchback have gone on sale in the UK, priced from £23,875 OTR. 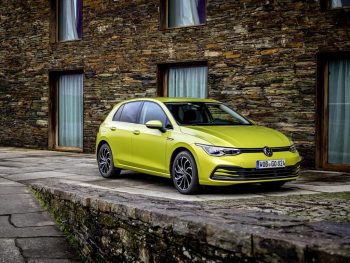 The GTE plug-in hybrid plus the GTI, GTD and R models will arrive later this year along with estate versions

Billed as the most connected car Volkswagen has produced to date and offering Car2X technology, a new digital cockpit and electrified drivetrains, the new Golf (see road test here) now follows German trim level badging. As such, the former SE entry-level is just known as Golf, SE is now called Life, while the SE L is renamed Style. R-Line and forthcoming GTE, GTI and R models are unchanged.

Initial launch versions will just cover the Life and Style trims, with R-Line arriving later, and covering two petrol and two diesel engines. Petrols comprise two 1.5-litre TSI engines with 130 and 150hp and married up to a six-speed manual gearbox, while diesel options include 115 or 150hp 2.0-litre units, the former with a six-speed manual and the latter solely offered with seven-speed DSG and in Style trim guise. Emissions start from 91g/km (NEDC Correlated) for the 2.0 TDI 115hp six-speed manual, rising to 112g/km for the 1.5 TSI 150hp six-speed manual.

Forthcoming engines will include 1.0-litre three-cylinder TSI petrol engines, as well as eTSI 48V mild-hybrid 1.0-litre and 1.5-litre petrol engines, which also get a seven-speed DSG transmission. No fully electric version will be offered as the ID.3 takes over from e-Golf.

Standard equipment includes Car2X technology, which facilitates wireless communication between the new Golf and other Car2X-equipped vehicles on the road, as well as so-called ‘street furniture’.