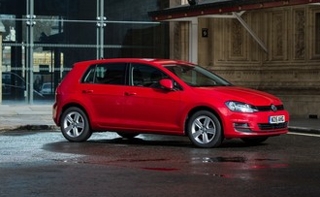 In fact Thatcham Research says third-party injury claims on the Golf VII are 45% lower than on rival models as well as the old model Golf.

“These findings are based on the equivalent of more than 7000 Volkswagen Golf VIIs insured for a full 12 months on the road, and comes from claims data from our insurance members,” said Matthew Avery, director of safety at Thatcham Research.

“When we saw figures based on an initial small sample, we were surprised, as they exceeded our own performance testing. However the figures held up, even after almost doubling the sample group and has therefore given us a glimpse of what safety on UK roads could look like in the future.”

The new follows last week’s announcement from Euro NCAP that low speed AEB technology is leading to a 38% reduction in real-world rear-end crashes.

Thatcham added that the VW’s figures are even more impressive since the Bosch-manufactured Autonomous Emergency Braking (AEB) technology on the Golf is actually a radar based system. In contrast, this year’s Volkswagen Passat uses a latest-generation camera and radar based system, also developed by Bosch, which has additional pedestrian detection auto-brake functionality, whilst test track performance indicates effective braking from a much higher range of speeds, with complete avoidance up to 25mph.

“If the performance of these latest generation AEB systems translates to the real world as expected, then it stands to reason that we should see third-party personal injury claims continuing to fall across the board, particularly when this latest generation system is installed on the Golf VII from later this year,” he said.

“AEB is now available on around 25% of new cars and is standard fit on more than one in ten,” added Avery. “Because AEB comes as standard on all but the entry level Golf, insurers reward the likelihood of lower claims rates by giving it a lower insurance grouping – up to 5 groups below an equivalent vehicle. This could mean a lower first year insurance premium, and year on year savings if no claim is made.

“Low-speed bumps and shunts account for three-quarters of all collisions, typically at speeds of under 20mph in city driving scenarios. This is where AEB systems perform best, avoiding crashes of up to 15mph and reducing the severity of those up to 25mph. This includes collisions at junctions, roundabouts and in stop-start traffic where one car runs into the back of another,” he added.

Previous: Fleets urged to remain 'open-minded' in vehicle solutions to keep ahead of tax changes
Next: Five things to know about the new drug driving laws