Volkswagen has revealed the successor to the CC saloon-cum-coupe – the Arteon. 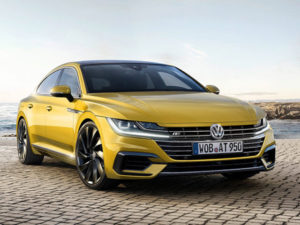 Due to go on sale in the UK this summer, the five-door Arteon is based on the familiar MQB chassis architecture used on the Passat and will carry over several of that model’s engines.

At launch there will be a choice of six engines – 2.0-litre TSI petrol units with 190 and 280PS respectively and the new 1.5 TSI Evo 150 unit which made its debut in the recently revised Golf. On the diesel front will be a trio of the ubiquitous 2.0 TDIs in 150, 190 and 240PS guises – the latter allied to 4MOTION four-wheel drive. Six-speed manual and optional seven-speed DSG gearboxes will be available.

Larger than the Passat, the Arteon uses a longer wheelbase (2,841mm compared to the Passat’s 2,791) to stretch its hatchback bodystyle – helping it to sit better not only on the road, but also in terms of market positioning as Volkswagen is keen for the CC replacement to be seen as a premium vehicle rather than just another Passat variant. As a result of the stretch in wheelbase, rear seat passengers also benefit from more legroom.

Volkswagen will offer the Arteon in two distinct trim levels in the UK – Elegance and R-Line. Both do as their names suggest – Elegance featuring restrained styling while R-Line brings restyled bumpers and larger alloy wheels for a more aggressive stance.

The Arteon will also debut new interactive assistance systems. The latest generation Adaptive Cruise Control now takes into account data such as speed limits and route information and automatically adjusts driving speed accordingly. The new dynamic cornering lights with predictive beam control now synch with the navigation system to anticipate when a bend is approaching and illuminate it before the driver turns into the bend.

Finally, the second generation of Emergency Assist will now slow down the car and steer it into the slow lane if a driver becomes incapacitated.

Previous: MoT failures due to TPMS defects ‘skyrocket’
Next: Subaru XV crossover on show at Geneva