Volvo’s XC60 has taken the overall winner title in this year’s UK Car of the Year Awards. 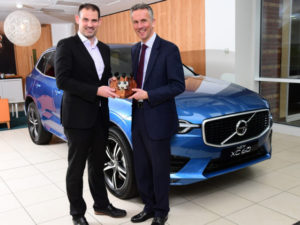 Already revealed as the class winner in the Best Medium Crossover category in January, the XC60 triumphed over 12 other class winners to claim the top honour, beating the Skoda Kodiaq by a single point, with BMW’s 5 Series in third place.

It is the first time that Volvo has won the overall prize at the awards and the company has gone one better than 2016, when the XC90 was runner-up.

“The XC60 being crowned UK Car of the Year 2018 is very well deserved, at a time when crossovers are becoming increasingly popular. Having come close in 2016 with the XC90, it’s fantastic to see Volvo now claim the top spot with its smaller – but every bit as impressive – stablemate,” said Challen.

Full list of UK Car of the Year Awards 2018 winners: