The Volvo XC40 has taken the European Car of the Year 2018 award, fending off runners-up including the Seat Ibiza and BMW 5 Series. 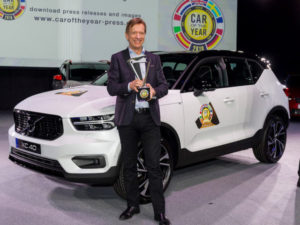 The XC40 took the 2018 European Car of the Year title from a list of seven finalists.

Announced at the Geneva Motor Show, the XC40 was awarded 325 points, putting it in the top spot, from a jury consisting of 60 members from 23 European countries.

“Winning this award with our new XC40 is perfect timing,” said Håkan Samuelsson, president and CEO of Volvo Cars. “Volvo now has three globally available SUVs in its range for the first time. The XC40 will be a strong contributor to further growth, taking us into a new and fast-growing small SUV segment.”

European Car of the YearVolvo XC40