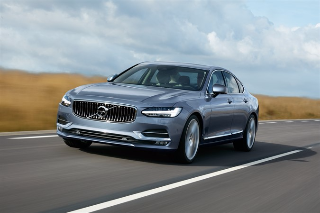 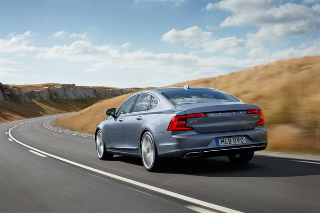 Available to order from next March, the S90 continues Volvo’s four-year process of renewing its entire model range, which started with the XC90 SUV this year. These will be arranged into 40, 60 and 90 clusters, each of which is likely to include saloon, hatchback/estate and crossover versions, badged S, V and XC respectively.

The S90 replaces the S80, which sold 600 cars in the UK last year, but the forthcoming V90 estate will supersede both the V70, bringing the brand’s largest models under one model line. Within that, there will be Momentum, Inscription and R-Design versions, plus Cross Country models as in the V40 and S/V60 line-ups – the V90 Cross Country replacing the XC70. All versions will get all-LED headlights, leather upholstery and satellite navigation.

Volvo is aiming to sell around 2,000 on average during its lifecycle, kept low to help manage residual values, and roughly half will go to fleets. The engine line-up includes two diesels; a 190bhp D4 with a manual gearbox, which returns 68.9mpg and emits 109g/km, and the 235bhp D5 AWD with an automatic gearbox, at 55.4mpg and 133g/km.

A T6 petrol and 44g/km T8 high-performance plug-in hybrid will also be available, shared with the XC90, and Volvo is expecting a strong fleet take-up for the latter based on its corporate-weighted 25% share of the SUV’s UK mix.

Pricing will be released during the Geneva Motor Show in March, where the S90 will make its European debut.