Volvo to provide DiDi with XC90s for self-driving test fleet 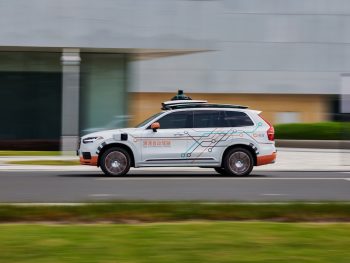 The carmaker is providing the DiDi Autonomous Driving self-driving technology arm with a number of XC90 cars, which will be equipped with DiDi’s new self-driving hardware platform and deployed for ride-hailing in its network in the future.

The tie-up makes use of the XC90s’ built-in backup systems and safety features which, combined with DiDi’s self-driving system, will eventually allow the cars to operate without safety drivers in robotaxi services.

The partnership is part of DiDi’s ongoing work to expand its autonomous test fleets across China and the US, and scale up its commercial robotaxi operations.

“This strategic collaboration with DiDi Autonomous Driving is further validation of our ambition to be the partner of choice to the world’s leading ride-hailing companies,” said Håkan Samuelsson, Volvo Cars’ chief executive. “Combining DiDi’s expanding robotaxi programme with our safe cars creates a great match to build trust among consumers for autonomous ride-hailing.”