Volvo has taken the wraps off its V90 Cross Country model, which builds on the new V90 estate with offroad-orientated features. 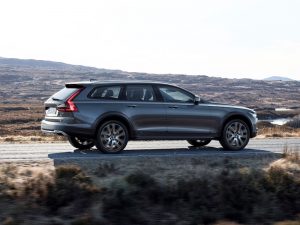 Revealed some 20 years after the launch of the carmaker’s first Cross Country model, the new model has been tested in facilities in the frozen north of Sweden and the Arizona desert and offers All-Wheel Drive, increased ride height and a chassis optimised for comfort and control in all weather and road condition. It also brings connectivity and entertainment features from the new S90 and V90, including a high-end sound system by Bowers & Wilkins.

“The V90 Cross Country takes the elegance of the V90 and transforms it into an all-road car that delivers safety, comfort and performance in a capable and adventurous package,” said Håkan Samuelsson, president & CEO, Volvo Car Group.

Production of the car is set to start this autumn at Volvo Cars’ Torslanda plant in Sweden.

UK prices will be announced later this year, and first deliveries are expected in Q1 2017.