Volvo UK has confirmed the plug-in hybrid version of its new XC40 crossover will be gradually rolled out Q4 2018. 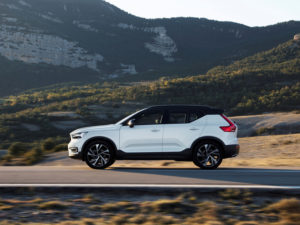 Adorned with a T5 Twin Engine badge, the car will be equipped with a three-cylinder petrol engine, powerful electric motor for electric-only driving and a large lithium-ion battery, likely to offer in excess of 20-miles range.

The car is the first to use Volvo’s new CMA (Compact Modular Architecture) platform, which demonstrated a plug-in hybrid powertrain in 2016 when Volvo confirmed the T5 Twin Engine setup.

Further details and specification for the XC40 T5 Twin Engine will be announced in due course – though much of the specification is already known.

For instance Volvo’s Drive-E 3-cylinder petrol turbo will have a cubic-capacity of 1.5-litres, be available with up to 180hp and be coupled to a 7-speed dual-clutch transmission (DCT) driving the front wheels. In addition, the T5 Twin Engine will meet “Euro 7 emission targets”, according to Michael Fleiss, vice president powertrain at Volvo Car Group in 2014.

An all-electric Chinese-built battery variant of the XC40 is expected too, as well as a second hybrid in-line with Volvo’s ambition to introduce its first fully electric car by 2019, put one million electrified cars on the road by 2025 and offer at least two hybrid versions of every model in its range.