Volvo has unveiled a new autonomous concept that it says could radically change the way people commute, including replacing domestic air travel. 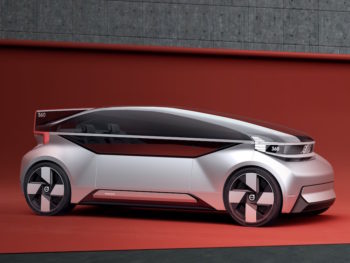 The fully autonomous, fully electric 360c concept – which features a sleeping environment, mobile office, living room and entertainment space – is only intended as a “conversation starter” at this stage but the carmaker said it “represents a potentially lucrative competitor to short-haul air travel”. It reckons journeys of around 300km (around 180 miles) “are prime candidates for disruption by an alternative mode of travel”. This would enable drivers to avoid airport security, queuing and waiting, and cramped aeroplanes while benefiting from door-to-door travel and a “first-class private cabin”.

The concept could also provide the carmaker with access to new growth markets, and could help rethink future city planning and infrastructure.

“The business will change in the coming years, and Volvo should lead that change of our industry,” said Håkan Samuelsson, president and CEO of Volvo Cars. “Autonomous drive will allow us to take the next big step in safety, but also open up exciting new business models and allow consumers to spend time in the car doing what they want to do.”