Volkswagen has unveiled its facelifted Golf, which brings updated styling as well as a new 1.5-litre turbocharged petrol and seven-speed DSG, and latest infotainment and assistance technologies. 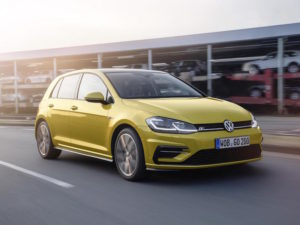 The 2017 Golf will debut the new 1.5 TSI Evo engine with Active Cylinder Management

Design modifications are subtle for the new model and include new bumpers at the front and rear, halogen headlights with LED daytime running lights, new full LED headlights instead of xenon headlights, updated front wings plus new full LED tail lights, which come as standard.

The interior brings changes to the decorative trim panels in the doors, the dash panel and the centre console, as well as new seat covers.

Bigger changes come in the form of new technologies and infotainment systems, including the top-of-the-range ‘Discover Pro’ system, which comes with a 9.2-inch screen and can be operated by gesture control – said to be a first in the class. Across the range, Volkswagen has replaced all of the existing infotainment systems in the Golf with a new generation featuring a new design and larger touchscreens.

Engine line-up sees the launch of a new 148bhp 1.5 TSI ‘Evo’ four-cylinder turbo with Active Cylinder Management offering official figures of 110g/km CO2 emissions and 57.6mpg on the combined cycle. This will be followed by a 128bhp BlueMotion version with 104g/km and 61.4mpg. Golf GTI models also gain increased performance. No other details of the petrol line-up have been released and no diesel models announced.

The 2017 Golf also brings a new seven-speed DSG that will gradually replace the six-speed DSG.