Volkswagen has opened pre-booking for the ID.3 electric hatch – which marks the first of its forthcoming ID family of all-electric cars. 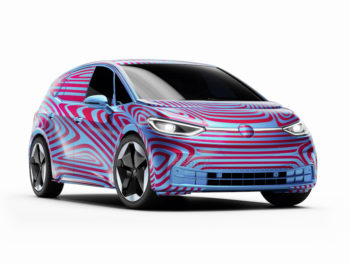 Potential ID.3 customers can register for an exclusive special edition

Dubbed ID.3 – a name intended to both mark its lower-medium segment status and herald its opening of a “third major chapter of strategic importance for the history of the brand” following the Beetle and the Golf – the model is now available for pre-booking in 29 European markets, including the UK.

In the UK, potential customers can register for an early production slot for the ID.3 at www.volkswagen.co.uk/id by paying a registration deposit of £750. This gives them access to the ID.3 1ST special edition, which is limited to a run of 30,000 vehicles. Production starts at the end of the year and first deliveries are due mid-2020.

“With the start of pan-European pre-booking for the ID.3, e-mobility at Volkswagen will become concrete for our customers. From today, everyone can take part,” said Jürgen Stackmann, Member of the Board of Management of the Volkswagen brand responsible for sales, marketing and after-sales. “With the ID.3, we will be ushering in the third major chapter of strategic importance in the history of our brand, following the Beetle and the Golf. With the ID.3, we are making the electric car fit for mass mobility. Initially, we will electrify Europe with the ID.3 and then other regions with further electric models in the ID family which are to follow in the near future.”

These additional models include the recently revealed Roomzz concept and the smaller Crozz SUV, the Buzz van/MPV, the Vizzion saloon revealed at last year’s Geneva and the Buggy; all of which are also built on VW’s MEB Modular Electric Drive Matrix platform and will join the hatch in getting official model numbers when they go on sale.

The opening of pre-orders for the ID.3 comes two months after the Volkswagen Group ramped up its electric offensive with a new strategy to launch almost 70 new models in the next 10 years – up from the 50 previously planned. The group also announced last month that SEAT is to take the lead on developing a smaller version of the platform for sub-£17k ‘affordable’ EVs.

The ID.3 will also be used for VW’s We Share electric car sharing service announced a year ago. The service – part of a raft of new digital solutions from VW – initially launches the coming weeks in Berlin with a fleet of 1,500 e-Golf models and a further 500 e-Up models to join later. But from 2020, these will be replaced by ID.3 models and the service will expand to further cities in Germany and Europe as well as to North America.

Previous: Next-gen Honda Jazz to get hybrid powertrain
Next: Today in Fleet – Wednesday 8 May