The Volkswagen Group has ramped up its plans for electric cars with a new strategy to launch almost 70 new models in the next 10 years – up from the 50 previously planned. 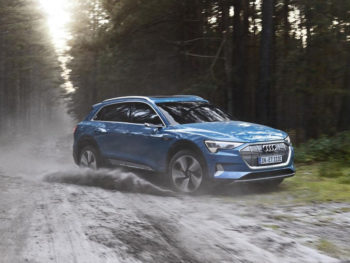 It means the projected number of vehicles to be built on the group’s electric platforms in the next decade will increase from 15 million to 22 million while the share of electric vehicles in the group fleet is to rise to at least 40% by 2030.

The first of the new-generation electric vehicles go into production this year, with the Audi E-Tron to be followed by the Porsche Taycan. Reservations for each of these models already total 20,000 units, according to the group.

Mainstream models will include the Volkswagen I.D. hatch along with the I.D. Crozz, Buzz and Vizzion models, the Seat El-Born supermini shown at Geneva and the production version of the Škoda Vision iV.

By 2025, the group is planning to reduce the CO2  footprint of the vehicle fleet by 30% across the lifecycle compared to 2015, while there’s a broader target for the group to achieve a fully CO2-neutral balance by 2050; as well as through the launch of new electric models, this also takes into account switching to renewable energy sources for power supply and to offset remaining emissions that cannot be avoided.

Work on its electric offensive has seen the group select LG Chem, SKI, CATL and Samsung as strategic battery cell suppliers, while Volkswagen is also taking a close look at possible participation in battery cell manufacturing facilities in Europe. It also said that solid-state batteries have great potential.

To boost e-mobility further, the group said it would install 400 fast-charging stations along Europe’s major roads and highways by 2020 in collaboration with industry partners under the Ionity network. 100 of these will be located in Germany while Elli, Volkswagen’s new subsidiary, will also offer wallboxes for charging at home, using green power – initially in Germany.

Dr Herbert Diess, CEO of Volkswagen AG, said: “The targets of the Paris Agreement are our yardstick. We will be systematically aligning production and other stages in the value chain to CO2 neutrality in the coming years. That is how we will be making our contribution towards limiting global warming. Volkswagen is seeking to provide individual mobility for millions of people for years to come – individual mobility that is safer, cleaner and fully connected. In order to shoulder the investments needed for the electric offensive we must make further improvements in efficiency and performance in all areas.”

Commenting on the announcement, environmental NGO Transport & Environment (T&E) said the plans were not perfect but did mark a game changer for the automotive industry that must be matched by infrastructure and green taxation.

William Todts, executive director at T&E, said: “This is the first credible climate plan by a major automaker. Volkswagen’s focus on affordable battery electric cars is right, and its admission that the Paris Agreement and the internal combustion engine don’t add up is a breakthrough. Now it’s time for governments to make sure taxes are reformed and ensure charging infrastructure is built so we can deliver the rapid transition to electric cars that the climate crisis requires.”

However, in response to VW’s comments that it will “compensate” for remaining emissions that cannot be avoided, T&E said it was crucial that the group does not rely on paying for offsetting projects in other sectors while it goes on emitting.

Previous: Why rival car mapping services could cause collisions
Next: Today in Fleet – Tuesday 12 March