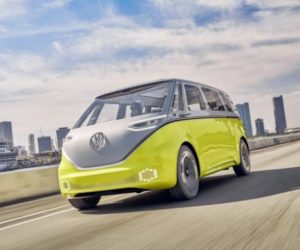 Volkswagen has greenlighted production of an electric van and MPV, said to be inspired by the split-screen Transporter and Microbus of the 1950s.

Previewed by the I.D. Buzz concept shown earlier this year and due to launch in 2022, the newcomers will join Volkswagen’s I.D. electric car range, based on a new platform which packages the batteries and drive systems in the floor to maximise interior space.

Volkswagen has confirmed the concept will be offered as a commercial vehicle as well as an MPV, the I.D. Buzz hinting that the latter could have eight seats on board. Highly automated driving modes will also be offered on both versions.

Previous: Fiat 500s chosen for pizza delivery
Next: Average cost of motoring penalties up 13% in a year