Vauxhall has confirmed details for its third SUV, which joins the line-up from 2017 and will be dubbed the Grandland X. 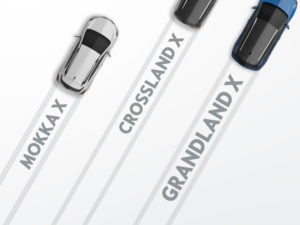 Vauxhall will have a trio of SUVs on offer from 2017, covering an all-wheel drive SUV and two crossovers

The new large SUV will sit above the Mokka X as well as the Crossland X model, which was announced last week and will replace the former Meriva SUV.

Vauxhall said the model will bring a design “that blends elegance with ruggedness”, and will also offer a raised seating position, good all-round visibility and plenty of luggage space. It will also bring a focus on accessability, cabin practicality, high levels of comfort and driving dynamics.

“We now have a compelling trio of new models for 2017 that are bang on target for a sector that has seen more growth recently than almost any other in the UK,” said Rory Harvey, Vauxhall’s chairman and managing director.

“The range now covers all bases, from an all-wheel-drive SUV to a choice of two highly practical and stylish crossovers, with different levels of space and equipment. Both the crossovers are incremental to Vauxhall’s existing range, so along with the new Insignia Grand Sport and its derivatives, 2017 is shaping up to be one of our busiest years ever for new product.”