Vauxhall to build PSA vans in Luton from mid-2019

PSA Group is extending the capacity of the Vauxhall van plant in Luton by almost 50%, with a new Vivaro on its own platform due to be built there, alongside Peugeot and Citroën vans, from mid-2019. 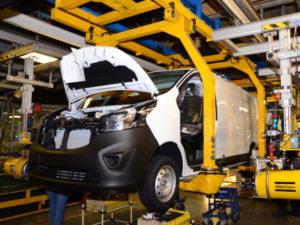 Confirmed by Carlos Tavares, chairman of the managing board, the move will bring Vauxhall’s mid-size Vivaro van onto the same EMP2 platform used by the Citroën Dispatch and Peugeot Expert from next year, which is said to safeguard the future of the plant for at least a decade.

The £100m PSA investment, including £9m of UK government funding, follows a plan negotiated with the Unite Trade Union and supported by Luton Borough Council, as well as working with stakeholders across Europe. It comes only eight months after the deal to buy Vauxhall-Opel was closed.

In turn, this will boost Luton’s capacity from 70,000 units during 2017, to 100,000 units, while guaranteeing the 113-year-old plant will continue for the lifecycle of the next Vivaro and its Peugeot and Citroën counterparts, all of which will be built at Luton.

Extensions to the workforce have not been confirmed yet, but Unite said it could create 450 jobs. Tavares added that the plant had cut manufacturing costs 17% in 2018 compared to 2017, adding that a further 20% reduction is needed to become competitive with European plants.

The announcement ends a partnership with Renault for mid-size vans which dates back to 2001 – the outgoing Vivaro was co-developed with the Trafic. Groupe Renault said this will cause less than a 1% impact on its three plants in France, where production of the high-roof versions takes place. It also closely follows the new Combo small van being moved onto the same platform as its Peugeot and Citroën counterparts, replacing its FCA-derived predecessor.

The larger Movano, which is derived from the Renault Master, will continue under the current partnership, though this was launched in 2008 and is likely to be coming close to the end of its life cycle. Peugeot and Citroën’s large vans, the Boxer and Relay, were co-developed with FCA, and launched in 2010. PSA Group sold a record 476,500 LCVs in 2017, a 15% increase on 2016, even when excluding passenger car versions.

Tavares said the plans come despite uncertainty around the UK’s departure from the EU: “Brexit remains a concern for our business. We welcome the recent agreement between the EU and UK about conclusion of term of the transitional arrangements, the clarity allows us to move towards transition more confidently but there’s still work to do to ensure frictionless trade.

“I take on board the assurances of the UK government on seeking tariff free and frictionless trade with EU going forward– there is a clear need to prioritise the automotive industry to make sure UK can continue to build on success seen over recent years.”

Business secretary, Greg Clark, added: “The market for vehicles produced here today is expanding, and we want to supply them well into the future. This is a big step in that direction; 75% of the products made here are exported around the world. It’s one of our most successful manufacturing facilities in the UK, and I’m delighted it will be for the future.”