Vauxhall has revealed the MPV version of its Vivaro van, which goes on sale next month to offer nine-seater versatility and an all-electric model from early 2021. 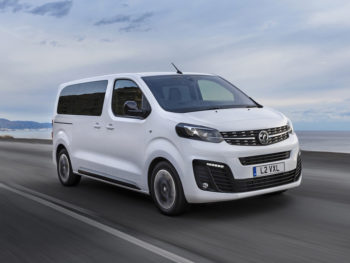 The new model will be built at Vauxhall’s Luton plant, helping to secure its future, and will be offered in two lengths: the 4.95m “Medium” and the 5.30m “Large” – each of which comes with up to nine seats and features a 3.28m wheelbase. They also offer sliding doors, which open electrically and offer foot movement operation, plus a two-piece panoramic roof and an opening window in the tailgate along with a payload of more than one tonne – said to beat rivals.

Removing the seats gives a total cargo capacity of up to 3,397 litres and the front passenger seatbacks can also be folded to allow the transportation of objects up to 3.50m in length.

Four, seven or eight leather-seat configurations are available along with five, six, eight or nine cloth-seat configurations. The Vivaro Life will also be offered in Lounge trim for the long wheelbase version, bringing front seats with massage and electric heating and two wider, moveable leather chairs behind with a wide seat cushion and a moveable table.

Driver assistance features includes a pedestrian recognition system that can initiate an emergency braking manoeuvre at speeds up to 18mph, intelligent cruise control, lane-keep assist and drowsiness alerts. High beam assist and colour head-up display are available and during the course of 2019, the Vivaro Life will also offer the Vauxhall Connect telematics service as standard. Onboard tech also includes a rear-view camera and 7.0-inch touchscreen with Multimedia and Multimedia Navi infotainment, both featuring Apple CarPlay and Android Auto.

Vauxhall has said it’s not announcing engine details yet but has revealed that an all-electric version will follow in early 2021 in line with plans to launch an electric Vivaro van model. This follows the announcement a year ago, post-PSA takeover, that Vauxhall/Opel will have four ‘electrified’ models on the market by 2020, including the Grandland X PHEV and electric Corsa, while all passenger carlines will be “electrified” by 2024 – meaning that they will offer a fully electric or plug-in hybrid version alongside “efficient” internal combustion engines, likely to mean mild hybrid usage.

The Vivaro Life makes its world premiere at Brussels Motor Show on 18th January and is available to order in February.