Vauxhall has previewed some of the design cues of the 2019 Corsa, with a new electric coupe-SUV concept car. 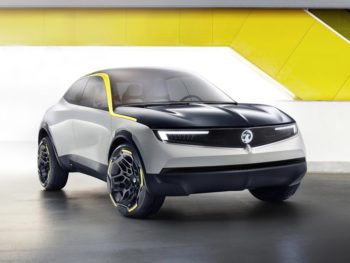 The GT X Experimental is said to give a hint of the brand’s new design, with a ‘visor’ grille encompassing the headlights, and featuring compass-needle cut-ins above and below the griffin badge. Vauxhall also highlighted the 17-inch wheels, which are designed, it said, to look three inches larger than they are – a feature which could come to forthcoming models.

Although it is a coupe-SUV, the concept is just over four metres long – slightly larger than the current Corsa, but shorter end to end than the Crossland X. Some of the design details are likely to make their way onto the supermini, which will launch next year based the same PSA Group platform as the Peugeot 208 and Citroën C3.

In 2020, the new Corsa will also get a fully electric version. The concept features a 50kWh battery, hinting at the sort of capacity that could be fitted to the electric Corsa, and also inductive charging. It also includes a driver-focused dashboard – which Vauxhall calls the ‘Pure Panel’ – with displays wrapped around the main instrument cluster.