Vauxhall has revealed that it will introduce Insignia Sports Tourer and Country Tourer models next year following the launch of the flagship Grand Sport hatchback. 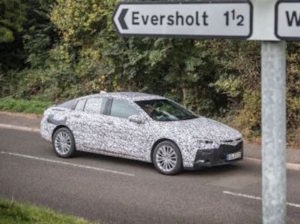 The Insignia Grand Sport is slightly longer, wider and lower than its predecessor, over a significantly lengthened wheelbase

As announced last month, the carmaker is undertaking final UK development of a larger, lighter replacement for the Insignia, due to be revealed at the Geneva Motor Show next year in hatchback form as the Insignia Grand Sport.

Now Vauxhall has announced the new Insignia Sports Tourer will follow soon after, taking many of its design cues from the 2013 Monza Concept. Compared with the existing model, interior space has increased significantly, especially in the rear cabin and luggage area, but the carmaker says design still remains a key point.

Next year will also bring the launch of a Country Tourer model, complete with all-wheel drive as standard and off-road styling. All three form part of a five-model offensive for 2017 that will also include two new SUV models. However, Vauxhall has confirmed there will be no saloon Insignia.

“2017 will be a landmark year for Vauxhall,” said Rory Harvey, chairman and managing director. “Our portfolio will grow, for sure, but it’s the quality and innovation which underpins our new products that will surprise customers. The Insignia Grand Sport will force buyers to reassess how they perceive our brand, and later in the year our two crossover offerings will bring Vauxhall to, in many cases, completely new sets of buyers.”

Previous: London Mayor reiterates call for national diesel scrappage scheme and VED reforms
Next: 69% of motorists would consider an EV for next company car