By Jonathan Musk / 7 months ago / Latest News / No Comments

The UK used car market has declined by 48.9% in the second quarter of 2020, according to the latest SMMT statistics. 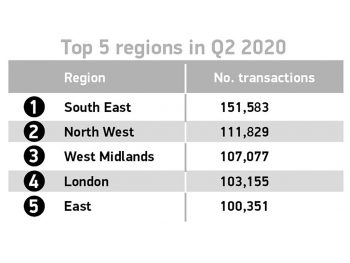 1,039,303 units changed hands in the second quarter of the year, although not unexpectedly due to COVID-19 and fleets looking to defleet vehicles will be pleased to learn that there are clear indications of swift recovery.

A peak year-on-year loss of 74.2% was recorded in April, but in June this had recovered to 17.5%. The SMMT added that it did not speculate as to how long it will take for the market to recover, given economic uncertainties and a need for greater activity in the new market to drive fresh stock.

Superminis remained the most popular segment with 30.5% of the market, despite a sales fall of 52.4%.

In the first six months of 2020, used car transactions were down by 28.7%, with 2.89m units changing hands. The second quarter represented more than 85% of the 1.16m lost sales so far this year.

Mike Hawes, SMMT chief executive, said, “As devastating as these figures are, with full lockdown measures in place for the whole of April and May, they are not surprising. As the UK starts to get back on the move again and dealerships continue to re-open, we expect to see more activity return to the market, particularly as many people see cars as a safe and reliable way to travel during the pandemic. However, if we’re to re-energise sales and the fleet renewal needed to drive environmental gains, support will be needed for the broader economy in order to bolster business and consumer confidence.”

James Fairclough, CEO at AA Cars, added: “Our research shows that three-quarters of drivers are unwilling to buy a car without seeing it in person, which may mean some people are putting off a purchase until they feel ready to visit a dealership. Where consumers are buying vehicles, one of the biggest growth areas on the AA Cars site has been in city cars, which might support the hypothesis that people have been swapping public transport for a car for their commute.

“Overall we have seen searches remain strong on the AA Cars platform, recording 114% more in July than during the first weeks of closure in March, which bodes well for the next quarter.”