Mercedes-Benz will launch an upgraded C-Class in March, featuring technology from the S-Class and new drivetrains including a diesel plug-in hybrid. 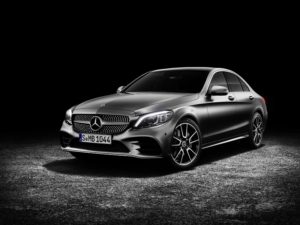 It replaces the brand’s best-selling product globally, with 415,000 sold in 2017, its fourth year on sale. The UK is its second-largest European market, with 45,912 registered last year, accounting for over a quarter of Mercedes-Benz volumes, of which 60% went to fleets.

Updated versions are marked out by styling which brings the model in line with the new E-Class and S-Class; a diamond-studded grille on AMG-Line versions, with new front and rear bumpers, wheel designs and headlights optionally featuring 84 individually controlled LEDs per side.

Inside, the C-Class can be equipped with an all-digital instrument cluster, and a new 10.25-inch central display, while the steering wheel features touch-sensitive buttons from the E-Class. New radar and camera systems mean it can monitor the road further ahead, and the adaptive cruise control can use navigation data to intelligently slow the car approaching a bend.

Engines and pricing are due to be announced ahead of the Geneva Motor Show, but expect the C-Class to move to the new-generation 2.0-litre diesel, also offered as the brand’s first diesel plug-in hybrid before the end of the year. This is expected to be a key component in its fleet portfolio, offering all-electric urban driving with the efficiency of a diesel engine for longer routes. The C 350 e plug-in hybrid is already one of the UK’s biggest-selling ultra-low emission vehicles.