Footage of a lorry driver with his foot on the dashboard and checking his phone has been revealed by Highways England as part of an ongoing clampdown on dangerous driving. 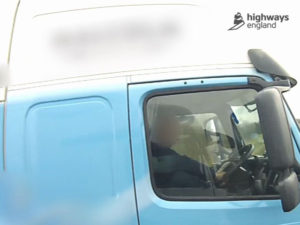 The driver was captured on film by an unmarked HGV cab that’s been used for the last two years to patrol motorways and major A roads and has captured over 5,000 offences on film during that time.

Other drivers spotted taking risks include a driver steering with his knees while he ate his lunch and used his mobile phone while another driver was seen trying to put toothpaste on a toothbrush. And one driver pulled over by Devon and Cornwall Police was found to have sent 10 replies to 10 texts within one hour.

The elevated position of the cab enables police officers to film unsafe driving behaviour while driving alongside vehicles, with drivers then pulled over by police cars following behind. Nearly two-thirds of the drivers who were stopped were illegally using a mobile phone while driving.