ULEVs and SUVs give Hyundai a fleet boost

Hyundai is seeing huge growth in fleet sales so far this year, with dealer and contract hire business rocketing by 119% year-to-date. 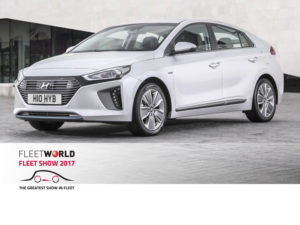 IONIQ will be at Fleet Show 2017, in both Hybrid and Electric forms.

The huge growth is being driven primarily by the IONIQ in both Hybrid and Electric guises, as well as the Tucson and Santa Fe SUVs – in fact, these three models are accounting for more than 90% of the manufacturer’s contract hire and leasing registrations.

For that reason, these three models will feature strongly at the Fleet Show, alongside versions of the i10 city car, i20 supermini and i40 in saloon and Tourer bodystyles. And there will also be the chance for many fleets to get behind the wheel of the new i30 lower-medium challenger for the first time.

Hyundai’s fleet director, Guy Pigounakis, said: “Our presence at the Fleet Show is very important and is a key tool in ensuring we remain front of mind for anyone considering a vehicle for business use.
“We have had a phenomenal start to 2017, with our dealer fleet and contract hire business growing some 119% ahead of our position at the same time last year. In other channels, our Affinity programme also continues to grow strongly.

“At the Fleet Show this year, we’ll have a number of key models on show, including the incredibly successful IONIQ, in both Hybrid and Electric forms, the Tucson and Santa Fe – nearly 92% of our contract hire and leasing registrations to date are down to these three models alone.

“Alongside them, we’ll also have the multi awarded winning i10, i20 and i40, as well as the New Generation i30 which is available from as little as £199 a month for business users from Hyundai Finance.”