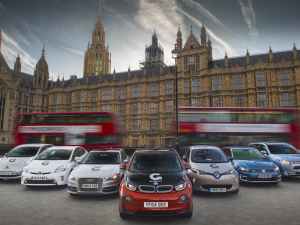 DfT figures show 9,657 ULEVs were registered in the UK in April to June, up 49% on the same period last year

The data released today (8 September) shows that 9,657 ULEVs were registered in the UK in the last quarter (April to June), an increase of 49% on the same period last year and 253% on 2 years before.

Over the year to the end of June 2016, ULEVs represented 1.1% of all new registrations, compared with 0.8% over the previous year and 0.2% over the year before that.

Most of the increase in ULEV registrations has been accounted for by vehicles eligible for plug-in car and van grants. New registrations in April to June 2016 included 9,220 cars and 274 vans of models that were eligible for these grants, 51% up on the same period in 2015.

Roads Minister John Hayes said: “I am delighted to see more drivers than ever are choosing electric vehicles. As awareness of the benefits grows, even more motorists will buy these cleaner, greener vehicles.”